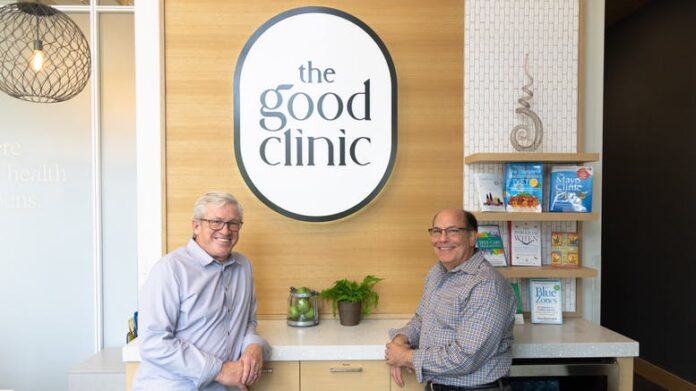 Several principals behind MinuteClinic, a pioneer of the walk-in medical clinic model that was sold to giant CVS in 2006 for $170 million, are back with a similar startup.

The Good Clinic, under MinuteClinic founder Michael Howe, 68, quietly launched in February with a flagship site in a residential-commercial complex called NordHaus in bustling lower Northeast.

Good Clinic also plans sites in Eden Prairie, St. Louis Park and St. Paul by December, as well as 50 clinics in in several states over the next three years.

Good Clinic is a subsidiary of publicly held Mitesco, an over-the-counter stock with bigger-market aspirations which recently hired investment banker E.F. Hutton to raise a yet-to-be specified sum to finance the growth of Good Clinic and other ventures.

Like MinuteClinic, Good Clinic is built around nurse practitioners as primary heath care providers. It has agreements or negotiations with major insurers, including Medicare.

Howe said the difference with the typical clinic-in-a-store model is that Good Clinic will provide a “medical home,” instead of more one-off visits to treat strep throat or an earache or panic attack.

“We want the accountability of health care to be [in the hands of the patients],” Howe said last week. “But they need the coaches, education and empathy. And study after study about the value of primary care shows that for every dollar you invest you save $13 in downstream health care costs.”

Good Clinic will locate in dense-population urban areas, with a spa-like feel and wellness plans for every patient. The focus will be convenience, value and satisfaction.

Amid a primary-care doctor shortage, care increasingly is being delivered by physician assistants and nurses, often outside traditional doctor offices.

There’s lots of competition. CVS acquired Target’s pharmacy business in 2015 for $1.9 billion and added MinuteClinics in many stores. Walmart, Walgreens and others are in the walk-in primary-care business.

Mitesco CEO Larry Diamond, 58, a Wall Street veteran who once worked for UnitedHealth Group, said Good Clinic is focused on the 70% of Americans who consume 25% of the rising U.S. health care spending, as opposed to the 5% who use about 50%.

Part of the Good Clinic secret sauce is an “activation tool” that helps determine if patients can self-manage and how providers can best work with them.

“We never knew 50% of the population is not good at self-management,” Howe said. “Our clinicians are now armed with the information. A diabetic has 10 things to do every day. Some people struggle with that. We parse it down to the vital few that they have to do.” Read the full article in the Star Tribune.

Press releases and media reporting contain forward-looking statements within the meaning of the Private Securities Litigation Reform Act of 1995. All statements other than the statement of historical fact contained in this press release are forward-looking statements. In some case, forward-looking statements can be identified by terminology such as “anticipate,” “believe,” “can,” “continue,” “could,” “estimate, “expect,” “intend,” “may,” “plan,” “potential,” “predict,” “project,” “should,” or “will” or the negative of these terms or other comparable terminology and include statements regarding the expected contributions to be made by Mr. Case including bringing the same level of innovative thinking and operational execution to The Good Clinic™ and providing  a growth path that will allow the Company to be recognized as an industry leader. These forward-looking statements are based on expectations and assumptions as of the date of the press release and are subject to a number of risks and uncertainties, many of which are difficult to predict that could cause actual results to differ materially from current expectations and assumptions from those set forth or implied by any forward-looking statements. Important factors that could cause actual results to differ materially from current expectations include, among others, a failure to successfully integrate Mr. Case into the management team of the The Good ClinicTM and the other risk factors discussed in Mitesco, Inc.’s Annual Report on Form 10-K for the year ended December 31, 2020, and subsequent filings with the SEC, including subsequent periodic reports on Forms 10-Q and 8-K. The information in this release is provided only as of the date of this release, and the Company undertakes no obligation to update any forward-looking statements contained in this release on account of new information, future events, or otherwise, except as required by law. In the past year, IA has been compensated by the company for providing progress reporting with five-thousand dollars per month, one hundred thousand shares and owns or controls an additional three hundred thousand shares.