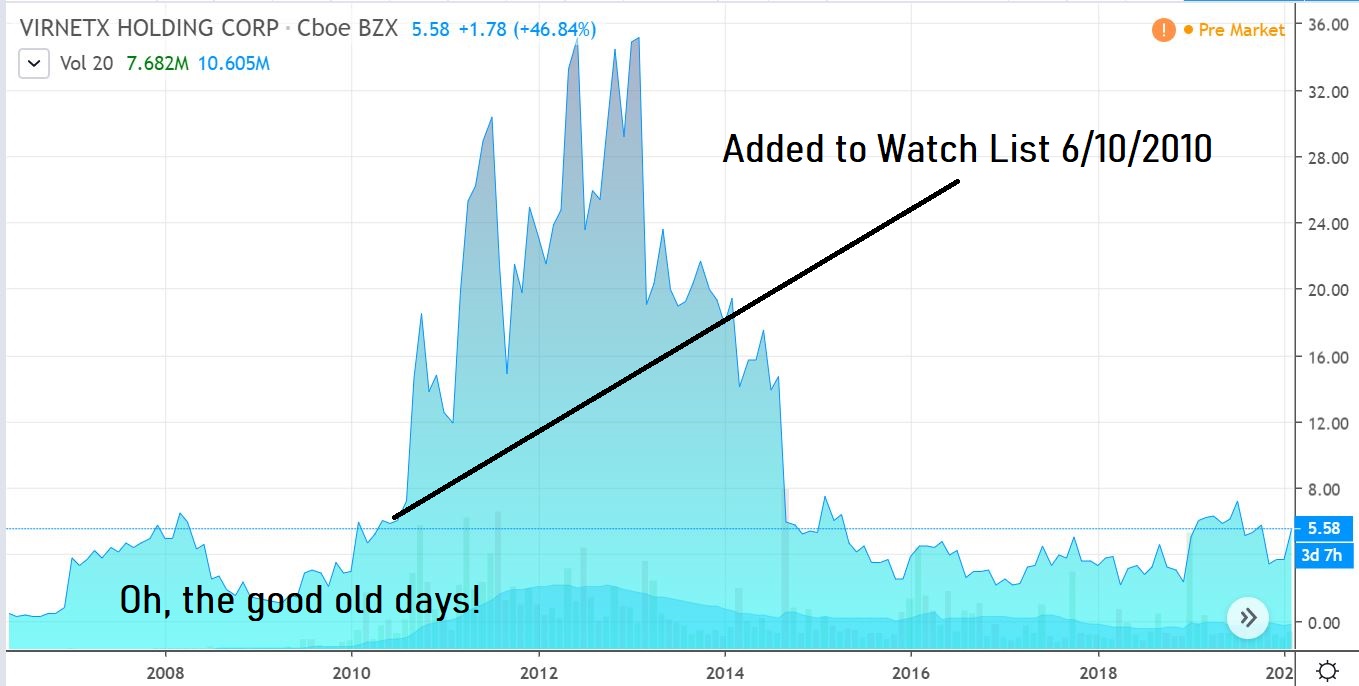 Blast from the past scores big!

We added VirnetX (VHC) to the Watch List (Patent Stock Review, since shuttered) back in 2010. VirnetX’s success in the litigation courts spurred a slew of publicly traded ‘trolls’ as they were called back then. We had one hell of a ride, first hearing about the idea from Dawson James a Florida broker-dealer at $2.00 per share, stubbornly waiting until $6.00 (we needed more proof) before adding it to the Watch List, after which it ran to near $40. Not our best idea ever, but certainly among the top 12!

Patent monetization stocks as we called them, used to fly 30-40% in a day merely on the news that they filed suit against billion-dollar multinationals like Apple or Microsoft. Hundreds of millions were made by investors who would quickly jump on the news of any lawsuit filing.

But then the wind changed direction in 2014, defendants starting winning and the news of an actual win against a multinational (optimism muddied by long appeal process) produced no effect to the stock price of the plaintiff and the entire sector (kinda like cannabis sector today) began a meltdown – with nowhere to run, nowhere to hide in the sector. The stock-market God’s giveth and taketh!

Even the pioneering granddaddy of the sector Acacia Research (ACTG) which rose from $2.00 per share in 2008 to $44 in early 2011 puttered out and today trades at $2.50. Fun while it lasted, even though it was a creepy kind of business- suing people for a living. Back then we said we were “protecting the rights of inventors and innovators.”

The market cap for VirnetX today is $380 million. Something wrong with this picture? They have $4 million in the bank and see below.

ZEPHYR COVE, Nev., Feb. 24, 2020 /PRNewswire/ — VirnetX™ Holding Corporation (NYSE AMERICAN: VHC), an Internet security software and technology company, announced today that the U.S. Supreme Court denied Apple’s petition for a writ of certiorari seeking review of the judgment of the U.S. Court of Appeals for the Federal Circuit in case 2018-1197.  The underlying judgment in the case awarded VirnetX a total of $439.8 million in damages, fees, and interest.

Catheter-related blood infections (CRBI’s) are a bad, bad thing. Deadly in fact. And the solution that Citius Pharma (CTXR) is working on is a good, good thing. Life-saving in fact (if approved of course). It’s called Mino-Lok®, write that down. Memorize it. Put it on your mirror.

CITIUS NEWS ARCHIVE TO GET UP TO DATE:

Yesterday DelveInsight a leading expert in pipeline analysis and API intelligence to the Pharma and biotech sector reported that EACH YEAR over 4 million incidents of these blood infections happen across the globe.

We don’t have a firm pricing model, as it’s yet to be commercialized. But let’s say IF it gets approved and IF the five-day treatment cost $950 – a number we pull out of the air but in the range of Wall Street estimates (Dawson James – HC Wainright) the back of the napkin market (addressable market) is $950 x 4 million. Yikes!

Now we have had experience with FDA approved drugs, procedures, and treatments in the past and we have to forewarn that nothing, no matter how good, reaches its full addressable market overnight. New products have to be ‘sold’ to the caregivers or hospital administrators – which takes time. Obviously, but sometimes not so obvious to investors.

But when you compare $950 x 4 million – to Citius Pharma’s market cap near $30 million, you have to take a look. A serious look, undisturbed. Read about CRBI’s, read about how they have progressed in the trials and watch this video on a routine catheter cleaning and it should become clear to you how easy it is to get a catheter infected with less than clean hands.

The report costs $6,250 which is, of course, pocket change to an enterprising institutional investor who wants to get that extra ‘proof’ to participate in what we are calling our single best biotech idea for 2020. If you missed VirnetX at $2 as we did, you might have a chance to make up for it here! Buy the report, do your homework.

Citius Pharma is a client, see all reports for disclosure and disclaimer details. VirnetX was not a client, but pretty much every friend we have on the planet owned some. Some did well and some, not so well. We never comment on when to sell.