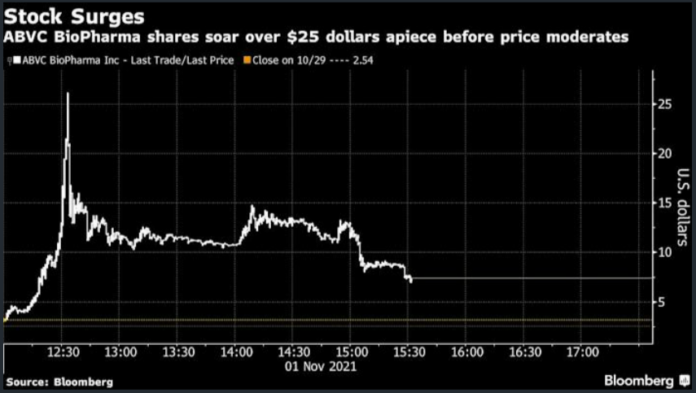 Guess we were bound to stumble across a meemster sooner or later! This is our 13th client idea to gain ten-fold, even if it was intraday and only for a few moments.

Adding American BriVision (ABVC) $2.00 to Watch List. Sometimes it pays to be early, the average daily volume back in April 2020 was 1,139 shares (not a misprint) and it’s traded 100 million shares today. What the?

This was also on our Six Stocks We Expect Double List. $7.00 Price Potential at $3.30. With ABVC finally joining the party, all six companies doubled (peak value).

The Fremont, California-based firm’s shares jumped as much as 930% in premarket trading and the stock was up 254% at 10:17 a.m. in New York. More than 50 million shares had been traded in the stock by that time, compared to its 12-month daily average of around 660,000.

At the end of trading on Friday, the stock had a market capitalization of $68.1 million. That now stands at around $242 million.

The company has filed for $50 million mixed securities shelf on Friday. It announced restructuring of a joint venture last month and filed for patent applications for some medicines treating depression and attention-deficit hyperactivity disorder in September.

Most Read from Bloomberg Businessweek

Smart for Life (SMFL) Teams up With Diamond Creek Capital