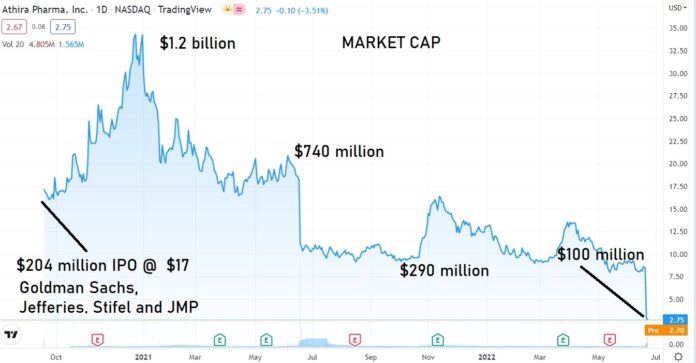 Nearly 100 Alzheimer’s programs have failed in the past decade.

Biotech investors should study or at least become familiar with the trials that fail to pass muster with the FDA. Typically referred to as not ‘meeting primary endpoints’ and/or also not showing ‘statistically significant’ difference over a sugar pill or the current standard of care (like an approved competing drug).

The reason to study is simple. What happens after a Company hears “no mean no?”

Short answer is some plunge, then plunge further. Some have tradable bounces (+30%). Some go sideways for months (or years if they have the money). And some like Cortexyme (CRTX) plunge and then go on a slow walk of death, like a wounded Water buffalo.

CEO Mark Litton said in a news release that the company is in a “fortuitous situation” because it has “a much larger trial ongoing with more than 200 patients completing at least 20 weeks of treatment providing us with an opportunity to obtain more insights in an expedited manner. Our strong cash position allows us to continue to progress fosgonimeton development.”

But some analysts are not.

In an opinion piece published Wednesday in the Journal Science, Derek Lowe, a director at the Novartis Institutes for BioMedical Research, wrote that Athira “is of course talking about subgroup analysis and re-examining the data, but I honestly don’t see much hope for that. Objectively, fosgonimeton would appear to be done. The company has already been enrolling Phase 3 patients, though, so it’ll get another shot, but I would be very, very surprised to see positive results.”

From here out, we won’t spend too much time following it, other than to monitor the price action, along with dozens of other FAILS we began to follow post failure.

Cortexyme presented its failure as a success. According to management, it was “a great day for Alzheimer’s research” with “positive outcomes across multiple fronts.” OMG LOL

CORTEXYME (CRTX) FAIL AND MELT DOWN