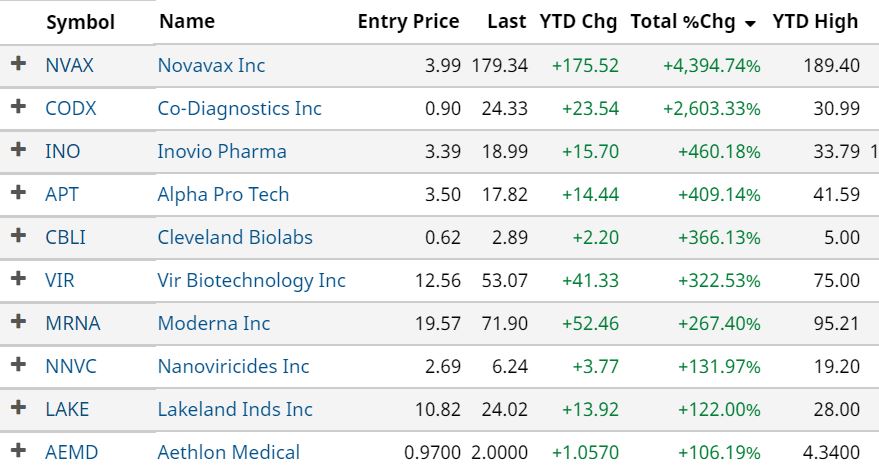 Good Lord. We’ve participated in nearly every intra-sector bull market since the ’70s, but we’ve never seen anything quite like the power moves, we’re seeing in this sector. Investors nimble enough to get in before their big moves have had the potential to make more money in the past 8 months, than in the prior 8 years!

Moderna (MRNA) the chief wealth maker, has risen to a $28 billion valuation (sales of $60 million). Novovax (NVAX) which rose from a mere $3 to an eye-popping $178, is now valued at $9.8 billion (sales of $18 million). Vir Bio (VIR) is valued at $6.1 billion (sales $8 million). Inovio (INO) is valued at $3.1 billion has sales of $4 million. Co-Diagnostics a test kit maker with $200,000 in sales, didn’t make the billion club – but is valued at $700 million, so don’t feel too bad for them or their shareholders. Shareholders, who held have enjoyed the stock rise from the ashes at $0.90, to a subsequent high of $30. And this was despite a concerted short effort by Mark Cuban and Sharesleuth at $11. These are the good old days.

Not a vaccine, not an anti-viral or a test kit. What they make is a sanitizer unlike any other (that can be used in hand sanitizers and industrial surface use). And we all know that sanitizers, currently flying off the shelves – is something which is going to be around for a long-long time.

Alcohol is 90% of the market. In a later report, we’ll delve into how effective alcohol truly is, with guidance from the CDC. You’ll be both surprised/depressed. But let us repeat in case you missed it. Aphex BioCleanse has the opportunity to up-end 90% of the market. This places the company in an enviable ‘current-valuation’ doesn’t matter category. In the biotech industry, ‘new-standard-of-care’ technologies always carry the highest valuation, as investors think ‘out with the old and in with the new’ and all the related sales associated with it.