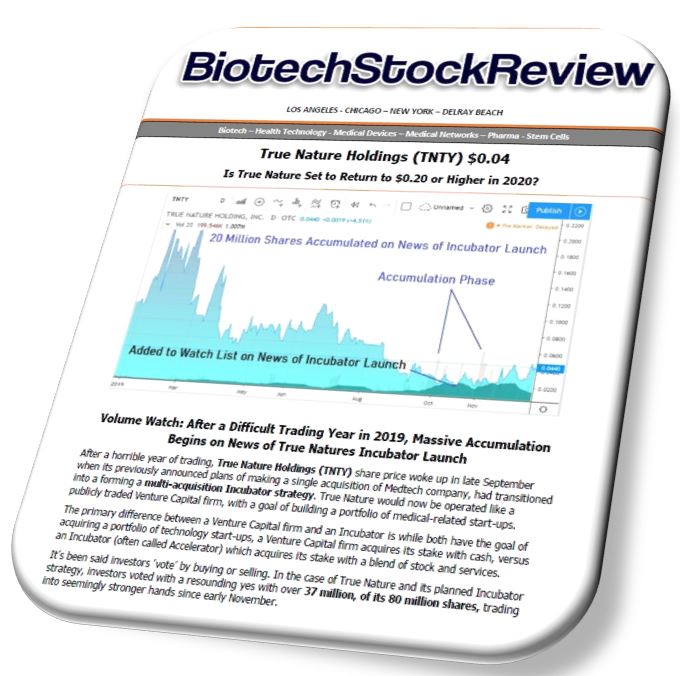 The big picture concept at True Nature is quite simple – which essentially having a publicly-traded company with extensive Wall Street connections – using those connections to place small but fast-growing medical startups under its umbrella – in exchange for a stake. The stake can be partial, full or a licensing to or from type relationship, potentially including royalties. For sure only time will tell what they uncover and how the deals are structured.

What will bring investor attention to the company will be news of acquisitions – meaning that they are executing on their game plan. The more news, the more attention. This we know for certain.

In summary, we have a Company which announced its intentions to operate as an Incubator, that is trading at a low which could provide investors with a five-fold gain if it returns to its year-earlier high, that only has 80 million shares outstanding valuing it at under $5 million, that has two high powered and experienced executives at the helm only announced a month ago, and that has begun paying off risky earlier financings.

Once True Nature announces their first acquisition, it will signal to prior shareholders that the opportunity has gone from ‘contemplated’ to ‘for real’ and that a new Sheriff is in town. In all likelihood, investors will not scrutinize the acquisition, because as we mention in the report, no one knows which startup will flounder, which will produce modest results and which turn into true gold. It could be the first acquisition, or it could be the 6th. What it will signal to both prior investors and new investors is that the game has begun, and they had better establish a stake before the answers to those questions are made clearer.