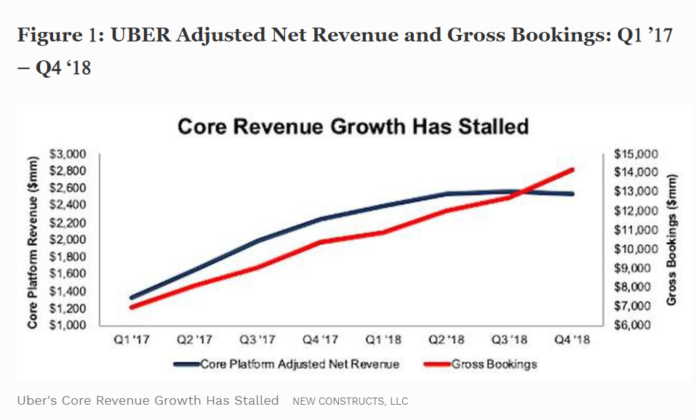 The most anticipated IPO in years is almost here. Ridesharing giant Uber (UBER) filed its preliminary S-1 on Thursday, April 11, and it will reportedly begin trading in May. While the company has not yet provided pricing details, it is rumored to be seeking a valuation of ~$100 billion. At this proposed valuation, UBER currently earns an unattractive rating.

In almost every respect, Uber looks even more dangerous than Lyft (LYFT), which is already down 20% from its overvalued IPO price. Uber is growing at a slower rate than Lyft, loses much more money, and has an expected market cap that is ~5x higher. Lyft’s troubled IPO seems to have dampened enthusiasm for Uber, which in turn is driving Lyft’s stock even further down. This feedback loop just shows that the valuations of these two companies only make sense in comparison to one another, and not to fundamentals or the rest of the market.

Numbers Don’t Back Up Growth Story

I’m not going to talk about Uber’s losses here, even though the amount of money the company loses ($3.0 billion in 2018) is astonishing. Everyone knows Uber loses money. At this point, the amount of money you’re able to lose seems to be a point of pride in Silicon Valley.

Instead, let’s talk about the story Uber wants to highlight for investors. According to Uber, they are still in the early stages of capturing what they estimate to be a $12 trillion (yes, that’s trillion with a “T”) total addressable market that includes personal mobility, food delivery, and freight shipping. For context, the World Bank estimates that global GDP was ~$80 trillion in 2017. Uber is saying they think they can capture 15% of global economic activity.

If that goal was remotely feasible, and Uber was at less than 1% of its total addressable market, you’d expect the company’s revenue growth to be rapidly accelerating. Instead, Uber’s revenue growth rate declined from 106% in 2017 to 42% in 2018. Even that number overstates Uber’s growth, as it doesn’t account for the extra incentives given to drivers. Uber’s Core Platform Adjusted Net Revenue, which strips out driver incentives, grew by just 39% in 2018, and it actually declined quarter-over-quarter in Q4 ’18.

Video: Everything You Need to Know About CRYPTO