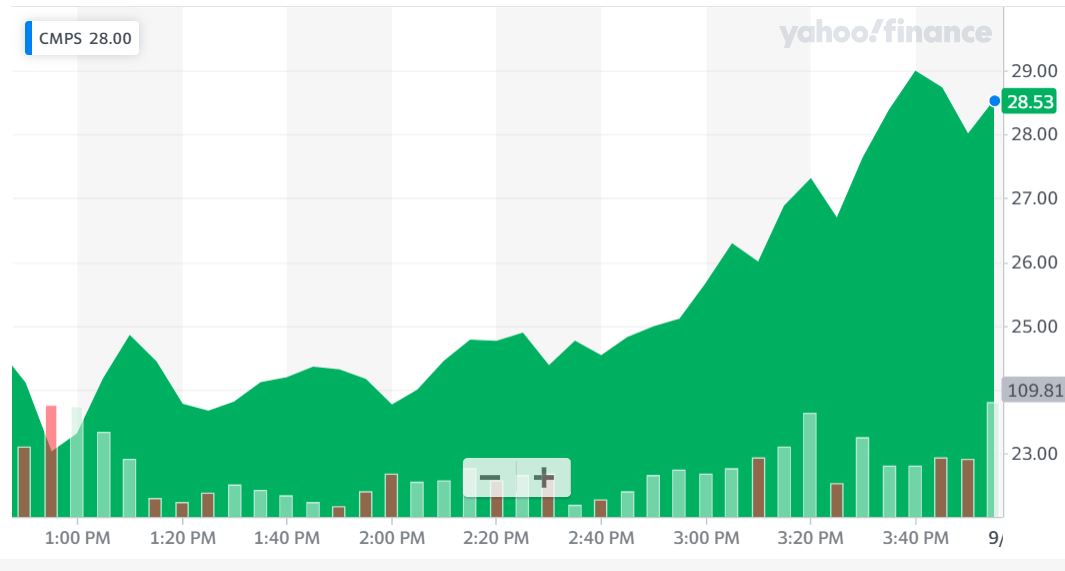 Shares jumped 71% to $29 in New York after an initial public offering of 7.5 million shares priced at $17 each (Yahoo/Bloomberg)

(Bloomberg) — Compass Pathways Plc, the U.K. company that has patented a synthetic version of the active ingredient in so-called magic mushrooms for use in treatment-resistant depression, went public on Friday.

Shares jumped 71% to $29 in New York after an initial public offering of 7.5 million shares priced at $17 each. Pricing was increased from 6.7 million shares at an expected value of $14 to $16 each, according to an earlier Securities & Exchange Commission filing. At current prices, Compass Pathways’ 34 million shares outstanding are worth almost $1 billion.

Compass owes its success to psilocybin, a psychedelic compound found in magic mushrooms that has shown promise in treatment for post-traumatic stress disorder and other mental health conditions. Backed by investors include Peter Thiel, co-founder of PayPal and early Facebook Inc. investor, and German entrepreneur Christian Angermayer, the company’s listing on Nasdaq is expected to raise $127.5 million.

Some of the funds will go to research and clinical trials, as well as to develop digital technologies to pair with Compass therapies, according to the SEC filing. It comes at the tail end of a week that has been the busiest for new listings on the U.S. stock exchanges in more than five years, according to data compiled by Bloomberg.

Compass was founded in 2016 by George Goldsmith and Ekaterina Malievskaia. Angermayer’s family office, Apeiron Investment Group, provided the initial funding in 2017. He has a pre-IPO stake of 29% that he controls through the psychedelic medicine company he founded, ATAI Life Sciences AG.

Angermayer brought in Thiel as an investor, who owns 7.5% ahead of the IPO, as well as Galaxy Investment Partners’ Michael Novogratz. Other investors include Founders Fund, Moore Capital Management and Japan’s Otsuka Pharmaceutical Co.

In October, 2018, Compass received “breakthrough therapy” status from the U.S. Food and Drug Administration, which sped up the drug development process. The company is currently running a Phase IIb trial. Approval from the FDA is expected in the next two to three years, according to sources familiar with the company.

Of the more than 322 million people who suffer major depressive disorder worldwide, some 100 million have treatment-resistant depression (TRD), the company said in its regulatory filing. Compass estimates the “economic burden” of major depression in the U.S. at more than $200 billion annually, and that TRD has an even greater cost.

It’s not exactly clear how psilocybin works in alleviating TRD. The treatment Compass envisions would take place in a therapeutic setting, with hours of counseling before and after the six- to eight-hour psilocybin experience.

For more articles like this, please visit us at bloomberg.com

Subscribe now to stay ahead with the most trusted business news source.