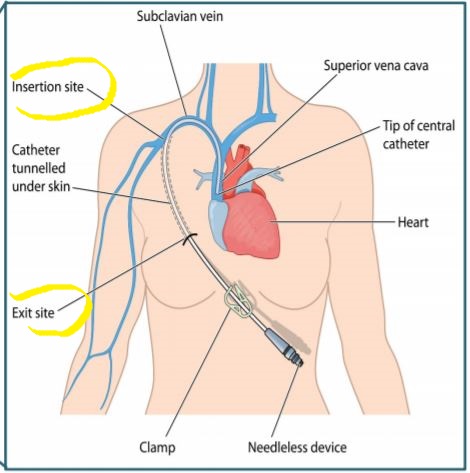 In the above graphic, the catheter can get infected by bacteria and most typically see evidence of the infection (see gross graphic below) at the point of insertion and/or exit. It doesn’t take an advanced degree in medicine to guess this can develop into a real problem and real quick.

If the hospital cannot eradicate the bacteria, they have to surgically remove and replace (470,000 times last year) the catheter or the patient may not leave the ICU alive, especially if Sepsis starts. Even with the replacement of the catheter, the patients’ life is still endangered, as it is a dangerous procedure.

The Citius Mino-Lok solution is the first – and only – therapy under investigation that can be used to sterilize and save the infected catheter. While guessing the eventual pricing of the Citius is speculative (meaning a guess), if they were able to receive $1,000 or $2,000 per patient – times 470,000 treatments – well you do the math. With a market capitalization of under $40 million, only the most conservative investor would sell in advance of further FDA related news and updates.

Sorry, not for weak stomachs but this photo of infection with a hemodialysis patient really highlights the seriousness of the problem. If the Citius Mino-Lok treatment gets approved by the FDA, it will save lives – and what’s better than making money in the market while at the same time..saving lives.

According to the World Health Organization, 56 million people die each year. Read more here. The Lancet estimates that sepsis accounts for roughly one in five deaths globally. Read more here.

Anyone affected by an infection can progress to sepsis conditions but some vulnerable populations such as elderly people, pregnant women, neonates, hospitalized patients, and people with HIV/AIDS, liver cirrhosis, cancer, kidney disease, autoimmune diseases and no spleen, are at higher risk. Read more on WHO Website.