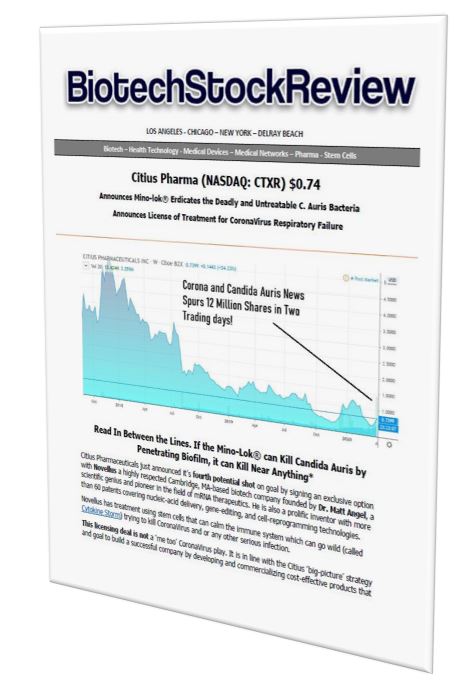 Read In Between the Lines. If the Mino-Lok® can Kill Candida Auris by Penetrating Biofilm, it can Kill Near Anything*

Novellus has treatment using stem cells that can calm the immune system which can go wild (called Cytokine Storm) trying to kill CoronaVirus and or any other serious infection.

This licensing deal is not a ‘me too’ CoronaVirus play. It is in line with the Citius ‘big-picture’ strategy and goal to build a successful company by developing and commercializing cost-effective products that..

We suspect news to be released soon (days/weeks) about the current trial (the 75%) mark which examines the effectiveness of Mino-lok® may be the last chance to acquire a meaningful stake with an excellent valuation. If this works as hoped, our opinion is, it really doesn’t matter what the market is doing.

We’ll go over the trial details in an upcoming report. The 75% mark is designed to prove that Mino-lok® is s superior treatment over ripping someone’s catheter out – who could be sick and old.

Press Release: Next major milestone in Mino-Lok trial is the 75% interim analysis for superior efficacy and is expected in first half of 2020

Heads Up! Big News on Stem Cells & Covid This Weekend.