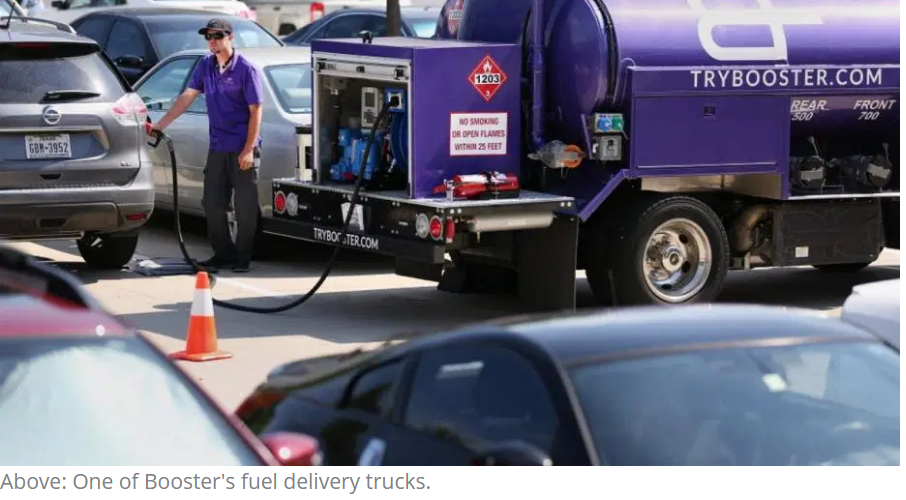 “We are really proud to have the support and confidence from these top investors as we work to change the way consumers get their fuel,” said Mycroft, an ex-Boeing engineer who founded Booster in 2014. “The partnership with Invus represents their drive and commitment to transform industries and long-term investments.”

Booster’s purple mini fuel tankers — which have delivered more than 20 million gallons of gas to date — drive directly to the cars and automotive fleets of tens of thousands of customers in over 20 cities, including the San Francisco Bay Area, Los Angeles, Orange County, and Dallas-Fort Worth. In accordance with U.S. law, each truck has been inspected and permitted by the Transportation Department, the company says, and by fire departments for local deliveries.

From the client-side, requesting a refuel is as easy as launching Booster’s mobile app, pinning a car location, and ensuring the gas cap is accessible wherever the car’s parked. Booster’s proprietary backend stack — FuelOS — optimizes routing to cut down on congestion-related slowdowns, and the company claims it’s responsible for preventing more than 2.32 million pounds of carbon emissions (1.4 pounds per delivery) by saving drivers trips to gas stations.

Booster charges for each delivery but doesn’t levy a membership fee — the only cost is the cost of gas. That’s perhaps one reason why it’s managed to attract big-name corporate clients like Toyota, Yahoo, Cisco, eBay, IBM, Oracle, PayPal, Pepsi, and Mercedes, many of which offer Booster as an on-demand service to their employees.

Booster isn’t the only startup chasing the $300 billion U.S. retail gasoline market, which has notoriously thin margins (around 7% at the pump) owing to high overhead. (Booster claims its profits are higher than a typical gas station’s because it’s able to procure fuel directly from providers like Shell and Exxon.)

San Francisco-based Filld has raked in close to $30 million for its mobile refueling service, which handles residential as well as business deliveries. Last February, GM and Exxon lead a $13.7 million investment in on-demand car care and gas delivery startup Yoshi. There’s also WeFuel, Purple, and InstaFuel, to name a few others.

But Mycroft isn’t concerned. As of November 2018, Booster was generating $180,000 in revenue daily, he says, and had completed more than two million deliveries in total.

“Our relationship with Enterprise started as a fleet customer, and now we’re very happy to welcome them, and Total, as investors. Their confidence in our business, and our ability to learn from their deep industry knowledge positions us to continue our leadership in the mobile fueling category,” said Mycroft.

Hapbee (HAPB) to Commence Trading on the TSX Venture Exchange.

Can This Diabetes Drug Make you Smarter?

Learn From Investing From Billionaires (Free)

Hapbee (HAPB) to Commence Trading on the TSX Venture Exchange.

All News Editor / Curator - October 27, 2020
DALRADA aims to introduce its VIA Test kit to females in India - of which there is 497 million.