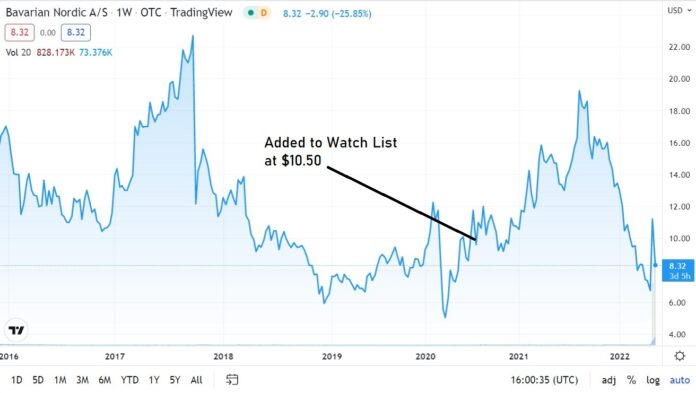 We Were up 80% on Bavarian For a Little While There. The Stock Looks Better Today, Then When we Originally Added to Watch List.

Following confirmation that monkeypox has made its way to the U.S., the government ordered millions of doses of a vaccine that protects against the virus.

Bavarian Nordic, the biotech company that makes the vaccine, has announced a $119 million order placed by the U.S., with the option to buy $180 million more if it wants. Should that second option be exercised, it would work out to approximately 13 million doses.

The order will convert existing smallpox vaccines, which are also effective against monkeypox, into freeze-dried versions, which have a longer shelf life. The converted vaccines will be manufactured in 2023 and 2024, the company says.

Bavarian Nordic has worked with the U.S. government since 2003 to develop, manufacture and supply smallpox vaccines. To date, it says, it has supplied nearly 30 million doses to the Department of Health and Human Services.

The U.S. isn’t the only country stocking up on the vaccine. On Thursday, Bavarian Nordic said an unidentified European country had secured a contract to obtain the vaccine.

“While the full circumstances around the current monkeypox cases in Europe remain to be elucidated, the speed of which these have evolved, combined with the potential for infections beyond the initial case going undetected, calls for a rapid and coordinated approach by the health authorities, and we are pleased to assist in this emergency situation,” said Paul Chaplin, president and CEO of Bavarian Nordic in a statement.

Monkeypox was first discovered in 1958 and the first human case was reported in 1970. Symptoms include fever, headache, body aches, exhaustion and a rash that spreads across the body. It is fatal in up to 10% of infections.

The recent outbreak was first identified in Europe on May 7, in an individual who had traveled to Nigeria, where monkeypox is endemic. Since then, over 20 cases have spread through England, Portugal and Spain. Other potential cases are being monitored now.

The first U.S. case was announced Wednesday and six other people are now being monitored. CDC epidemiologist Andrea McCollum told Fortune late Wednesday that she isn’t particularly concerned about outbreaks, but that potential additional U.S. cases are likely.

This story was originally featured on Fortune.com