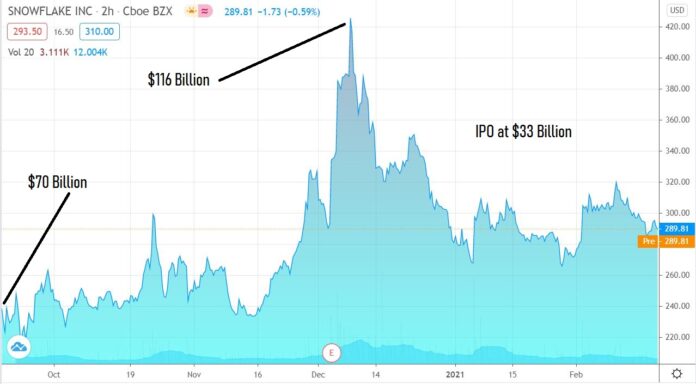 We haven’t looked at Snowflake (SNOW) since its amazing IPO debut. It was priced at $120 and opened for trading at $245 and closed at $254, valuing it near $70 billion. Meaning an increase in the value of $34 billion – in one day.

Before actually checking the price this morning, we assumed it would be trading mid-$100’s. Not an unreasonable assumption.

Lesson to be learned? None we can see other than buy everything in site!

IBM currently has a market capitalization of $112 billion.

According to data from YahooFinance, the average analysts expects Snowflake to record $1.1 billion in sales and IBM to record $74 billion in 2022

As we said, no lesson here – as old math gets thrown out the window. Price to sales, don’t matter. Price to earnings, don’t matter – Snowflake is expected to lose $0.92 a share in 2022.

Either adapt or sit on the sidelines.

Next up on deck – Tanium?